Here is Anders’ favorite book from this school year (Murder for Her Majesty received his top-honors, too). 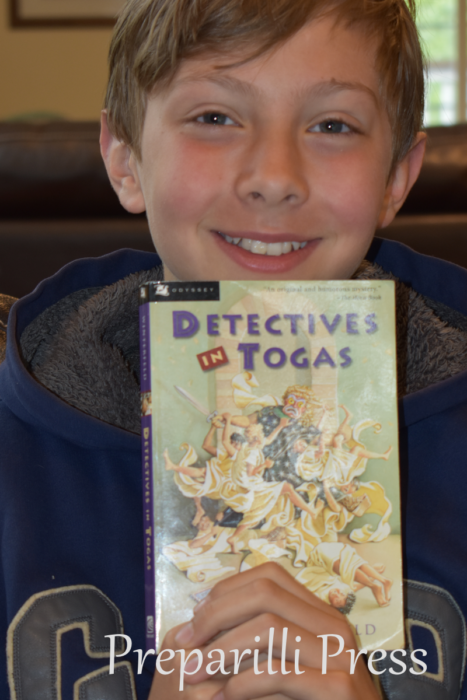 If your friend was arrested and you knew that he was not guilty would you take on a scary magician to save him? The book Detectives in Togas, by Henry Winterfeld, is an exciting mystery story. It is filled with danger and peril as the boys from the prestigious Xanthos School in ancient Rome try to find a way to save their friend.

Mucius, Antonius and the rest of the boys didn’t believe it when they were told that their friend Rufus had desecrated the temple—a crime deserving death. They were sad that he had been arrested for what they thought was a false accusation. They decided that they where going to try to prove him innocent.

The schoolboys could have given up at many different times. When they found their teacher bound, gagged and stuffed in a wardrobe, they were scared. But they pushed through their fear. While they were looking around the desecrated temple for clues, they found a chain lying on the ground. They thought it might belong to the real criminal. They took the chain to a soothsayer to find out to whom it belonged. The man got really angry and threw snakes at them, which surprised and scared them. They ran away afraid. But, then the pieces started falling into place.

I think this book in an exciting mystery story. It is also a story of how friends never give up on each other. This is why it is my favorite book this school year.