There are lots of great books in Core E. You can see what the kids liked last year here and here. This year Annelise, age 8, really enjoyed In Search of the Source. It is a pretty awesome book about missionaries to a tribal people in Papua New Guinea and the struggles they went through to not only share the gospel, but to give them the written Word of God.  Here is what Annelise had to say: 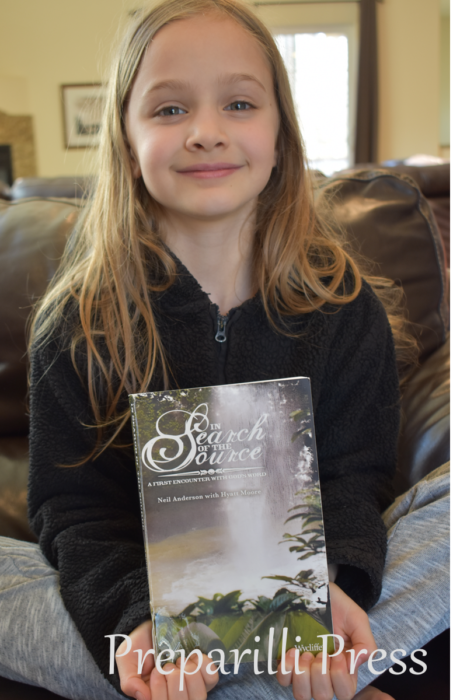 In his book, In Search of the Source, Neil Anderson and his family share the gospel with the Folopa tribe of Papua New Guinea. Along the way there are many difficulties, but the power of God’s word helps them find a way through. This is a story of true faith, bravery and lovingkindness.

Neil and his family went to Papua New Guinea to translate the Bible into the Folopa language. To do this, they had to learn the language and make it into a written language; be accepted by the people; and teach them how to read. God had called them to do a BIG JOB!

On the first day of translating, Neil had begun to write, but he was struggling to find a Folopa word for “created”. It was hard for him to describe it, and harder still for the Folopans to understand what he was asking. Two days later, on a hunting trip, he found the answer in a surprising way while eating a leaf-plateful of grubs!

This account is full of the amazing ways God reveals Himself to man, and helps someone like Neil to do the work He had called him to do. The faith that the Folopans had and the joy they found in knowing Christ encouraged me and I know you will enjoy it, too.

We had some fun this week celebrating sping and looking forward to Easter. My kids love it when we celebrate with a photo booth (Krista’s props make them especially fun) and I love it when we work on their writing skills :). So, I put together some fun spring writing activities that you can use… END_OF_DOCUMENT_TOKEN_TO_BE_REPLACED

Here are Annelise’s favorite books from this past school year. Annelise, 7 As Om-kas-toe and his sister were serving as lookouts for their Blackfeet tribe, the discovered a strange animal. Life for their tribe would never be the same. Om-kas-toe, by Kenneth Tomasma, was my favorite read-alone book from this school year. In this book… END_OF_DOCUMENT_TOKEN_TO_BE_REPLACED

Here are Knud’s favorite books from this past school year: Knud, age 9 My favorite read-alone book was All-of-a Kind-Family by Sydney Taylor. It is a story about an immigrant family living on the Lower East Side of New York City in 1912. There are five girls living in this family. We have a big… END_OF_DOCUMENT_TOKEN_TO_BE_REPLACED

We love Math-U-See’s curriculum! All of my kids have benefited from the instruction and structure of this math program. But, although we are not yet at the end of a school year, my Gamma girl is “finished” with her math for the year.  (Math-U-See’s Gamma is a 30 week multiplication curriculum and our school year… END_OF_DOCUMENT_TOKEN_TO_BE_REPLACED

For some of our children, like my eight-year-old, multiple-digit multiplication can be quite a challenge. It isn’t the math facts that are a stumbling block, its the structure–the placement of products–that creates a problem. So, after multiple explanations of the WHYs and WHEREs with me watching like a hawk as she worked each problem, I… END_OF_DOCUMENT_TOKEN_TO_BE_REPLACED

This is the third, and final week, of your student’s first research paper!  (You can view Week One and Week Two by clicking the links). It is writing week and we are ready!  Begin this week by having your students fill in the “Possible Hooks” page of their Research Booklet.  If writing a hook is… END_OF_DOCUMENT_TOKEN_TO_BE_REPLACED

This week your students will transform their notes into an outline.  Begin this week by ensuring that all of your students’ notecards are complete–as complete as your third graders can get them :)! The next step is organizing the notecards into groups–the prompted notecards make this a simple step. Now it is time for your… END_OF_DOCUMENT_TOKEN_TO_BE_REPLACED

Before we jump into the first week of our research paper, let’s take a look at our plan for the next three weeks: WEEK ONE:  Pick a Topic; begin research—compile information on note cards; document sources in research booklet. WEEK TWO:  Finish research and develop an outline WEEK THREE:  Turn outline into a rough draft… END_OF_DOCUMENT_TOKEN_TO_BE_REPLACED

This is an exciting time of year for third graders as they embark on writing their first animal research paper.  Okay, maybe for some it is a nail biting, tear-filled experience–but, it doesn’t have to be!  My First Research Paper will help you (and your students) Get Organized and Get it Done! Here is what… END_OF_DOCUMENT_TOKEN_TO_BE_REPLACED