Here are Knud’s favorite books from this past school year: 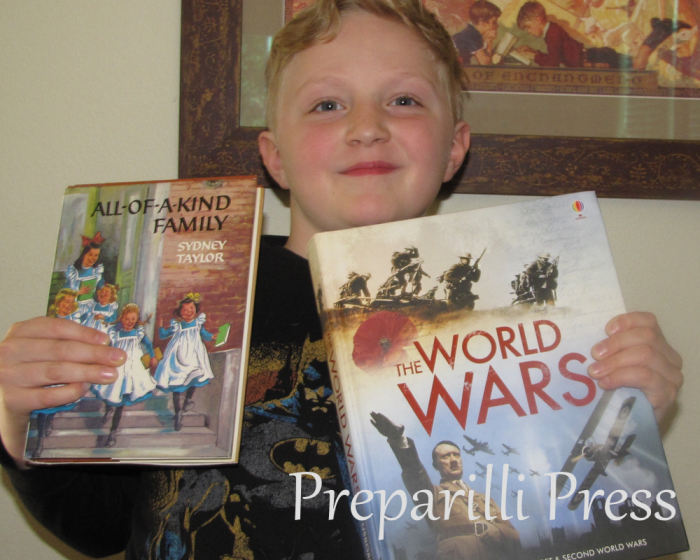 My favorite read-alone book was All-of-a Kind-Family by Sydney Taylor. It is a story about an immigrant family living on the Lower East Side of New York City in 1912. There are five girls living in this family. We have a big family, too—but not all girls! What I liked about this story was how the girls were kind to each other and helped each other. There was one time that Sarah, the third oldest, lost her library book because she had shared it with a friend. The librarian said she had to pay a dollar for the lost book. Sarah was so sad. She had been saving her pennies to buy a doll with real hair. Her sisters decided to help her pay the fine, so she could still get the doll she wanted. This is a great book about a family that cares for each other.

I really liked Usborne’s The World Wars. It is an action-packed, picture-filled book about World War I and II. It describes the events that took place before, during and after the World Wars. I especially liked hearing about the aircraft they used and the stories of people who fought in the wars. You will learn a lot about these two world-wide events when you read this book. 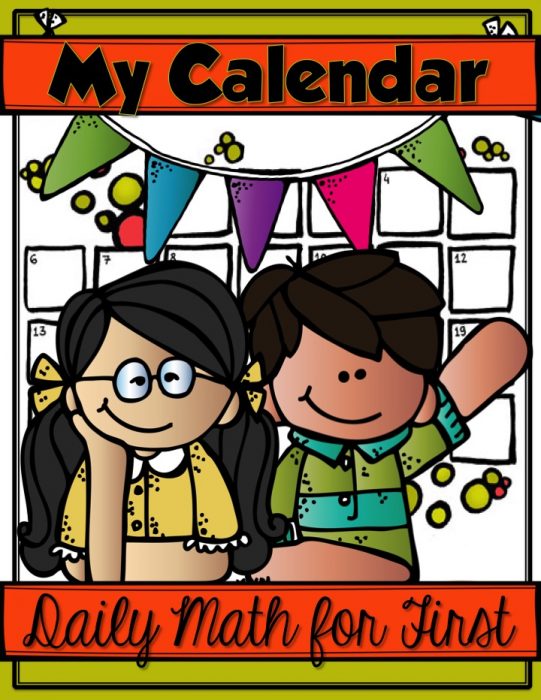 We’ve got something new for you to try! Daily Math review for First Graders! It is a perfect way to spend your calendar time each day. These pages are loaded with calculations, computations and creative hands-on learning. They are a great assessment tool for you, too 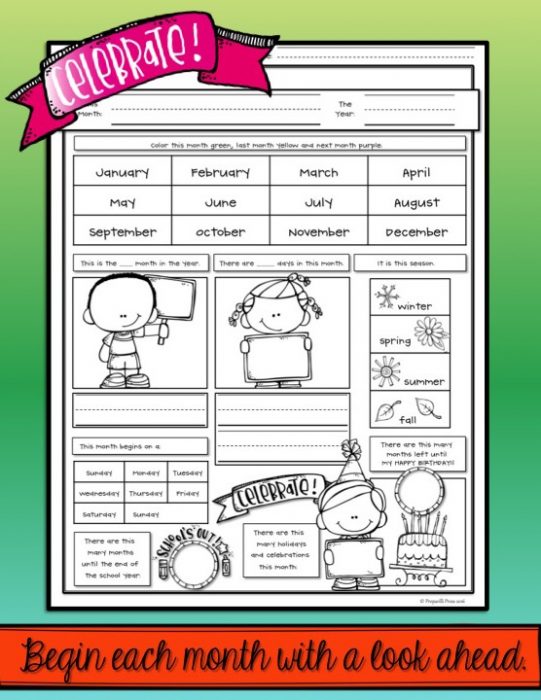 For each month (AUG-JUNE) There are five sheets that you can rotate through the days of the week. There are some tasks that are present on every sheet. These are related to the date and Days in School computation. 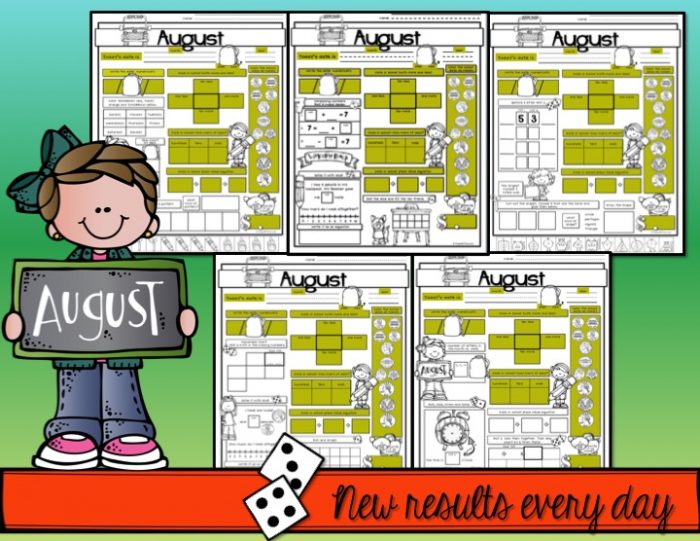 Do your students compute their Days in School? Don’t just give them the answer! They can do it themselves with these handy helpers: 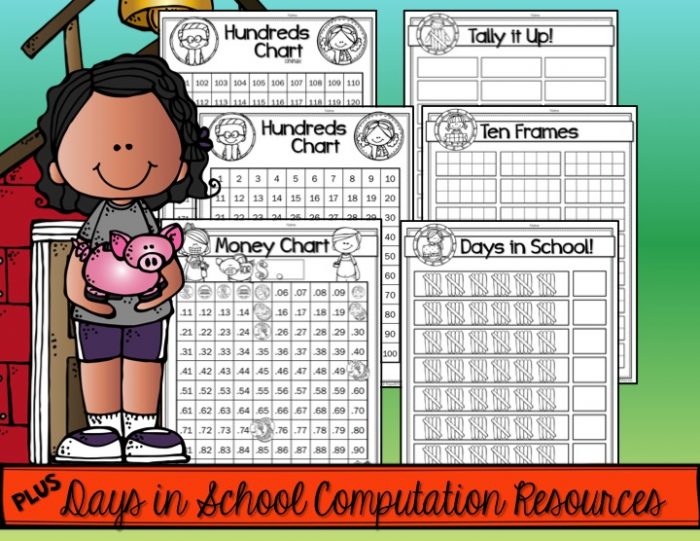 During the first few months of school we use the Tally it Up! and Ten Frames to count the days. As the weeks go by, the Days in School sheet becomes the most useful (and quickest to use).

We dot one group of five tallymarks for each week (Monday-Friday) and then shade the remaining days. Skip count by five and add your ones–great mental math!

Grab some coins! It is time to transform the days in school into money. The Money Chart is a great help for your visual learners (be sure to slide this one into a page protector, or laminate it–you’ll want to reuse it all year!). Have them begin by writing the target number at the top of the page. Then build that number beginning with the biggest coins–for example Finn was trying to build 167. First he grabbed a dollar (this eliminates the 100). Next, two quarters (there is the 50); then a dime (now we are at 60); add in a nickel (now we are at 65); and finally grab those pennies, we’ll need 2 to get to 67. 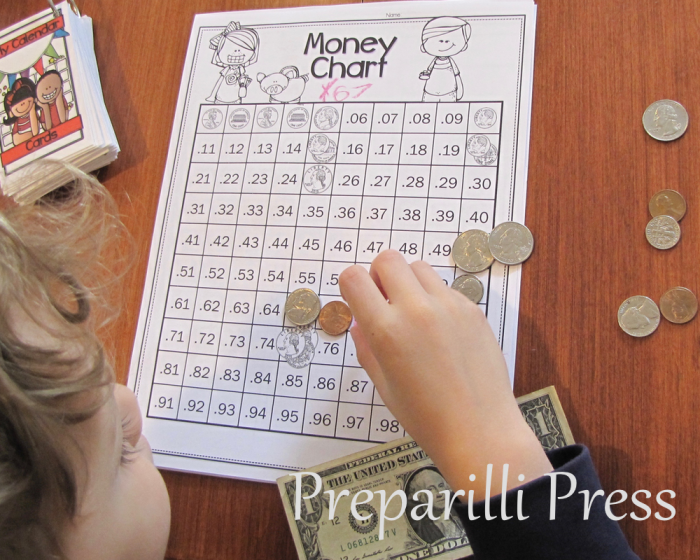 After figuring how to transform days in school into money, your kids will mark it on the monthly sheet. 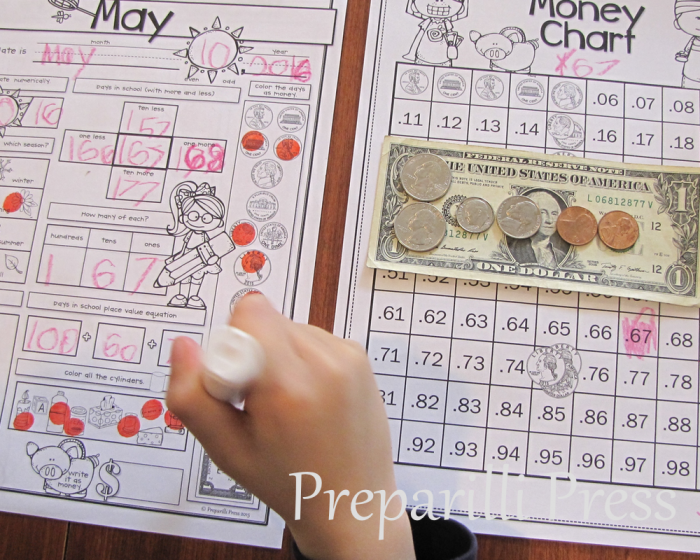 Finn’s sheet for May is different from the ones in the My Calendar Daily Math for First pack. A smart teacher (thank you Sabrina!) encouraged me to modify these sheets to enable you to not only use them once, but re-use them all month. Your students will use dice and the cut-outs at the bottom of the sheets to accomplish a wide variety of math tasks. Here is a look at the five reusable sheets for August: 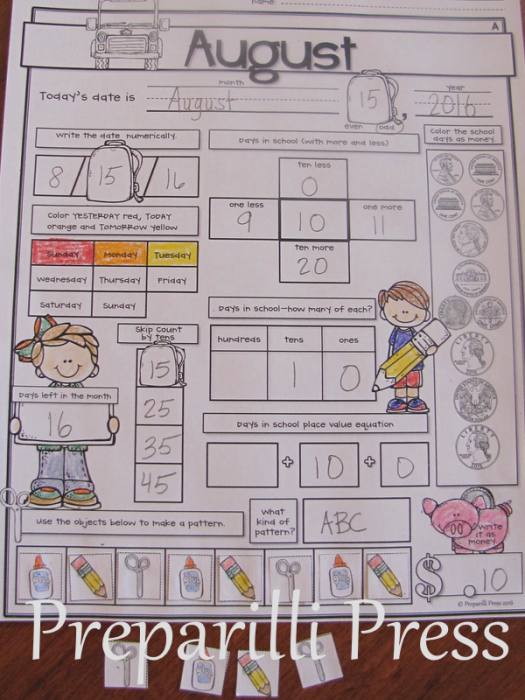 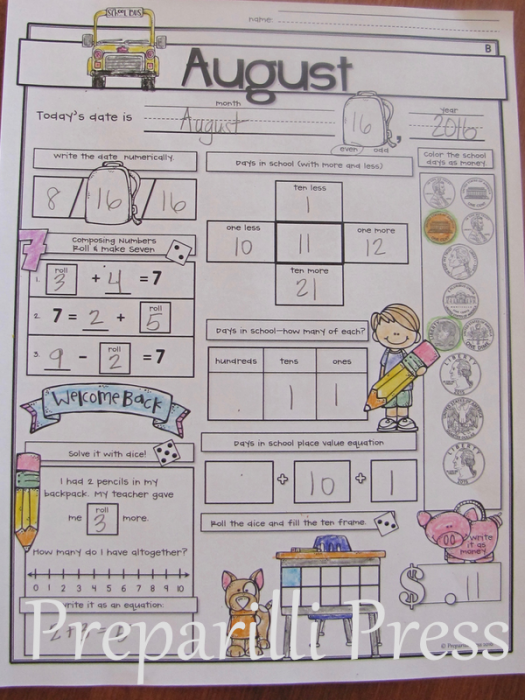 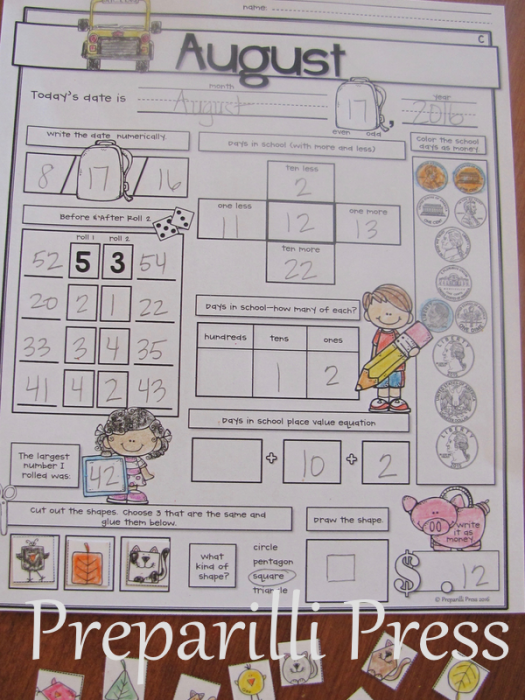 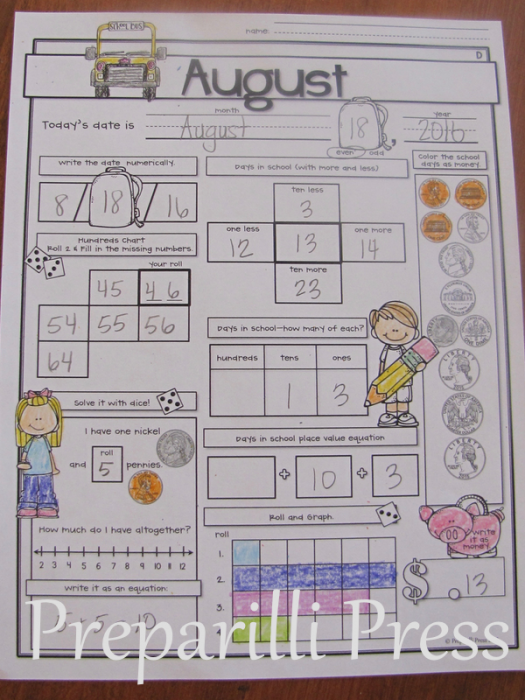 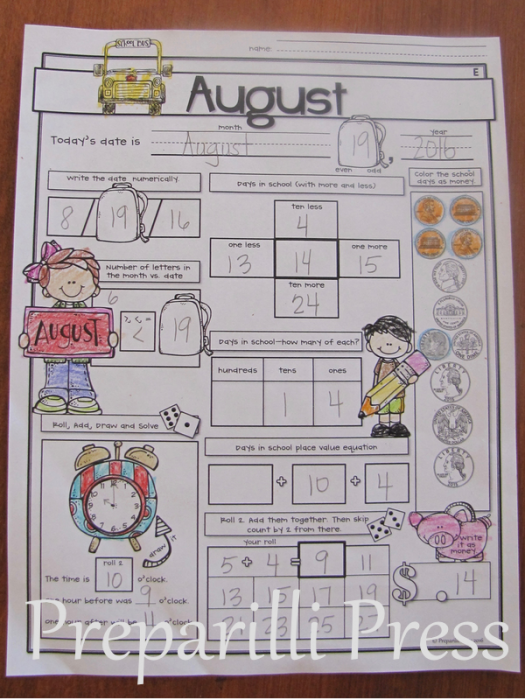 I have more handy tips for using these sheets to post another time. But, right now, you’ll want to head over to Teacher’s Notebook and enter my giveaway! You could win a copy of My Calendar Daily Math for First! Or, grab it for half-off at Teacher Pay Teachers through Saturday! 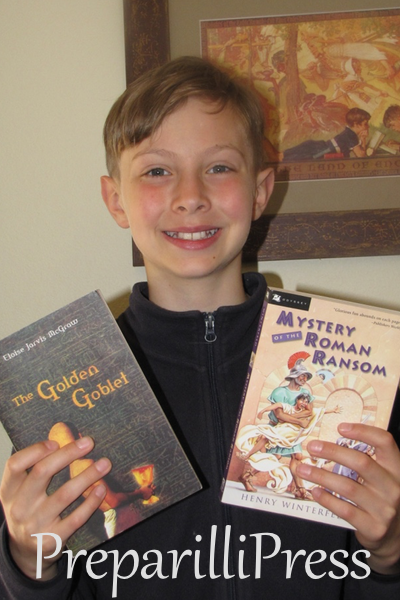 My two favorite books this school year (Core G) were Mystery of the Roman Ransom by Henry Winterfeld and The Golden Goblet by Eloise Jarvis McGraw. Mystery of the Roman Ransom is a historical mystery about a group of boys in Ancient Rome who buy their teacher a servant for his birthday. This turns out to be the beginning of their big adventure because the servant is actually a secret messenger. The message he is carrying requests the assassination of one of Rome’s senators, who is also one of the boys’ fathers. They have to find out who the target is and stop the assassin before he is successful. It is exciting to read how they figure out this mystery and save Rome.

The Golden Goblet is another exciting historical mystery that takes place in Ancient Egypt. Ranofer, the main character, wants nothing more than to be a Master Goldsmith like his dead father. But, he is forced to do what his evil, tomb-robbing, half-brother Gebu wants him to do. Until, Ranofer finds a priceless golden goblet in Gebu’s room with the name of an ancient pharaoh carved on it. He knows he must stop his half-brother from robbing tombs, but how can do that? It is fun to read about what happens to Ranofer and to find out how he stops Gebu and his evil friends from robbing the pyramids of their many treasures.

I asked my kids to pick their two favorite books from this school year and here is what they had to say: 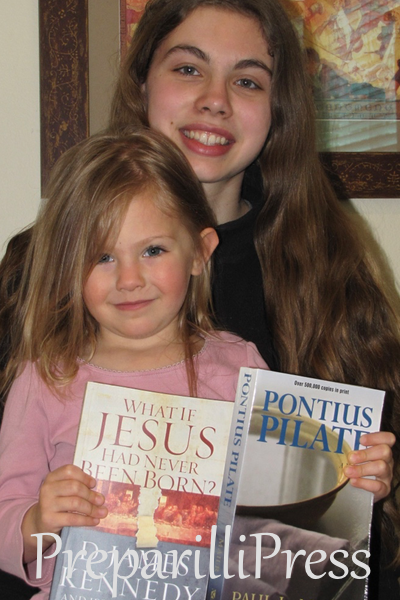 This school year we studied Church history. I enjoyed many of the books I read year because of their historical and spiritual significance. My ten favorite books were: Till We Have Faces and The Screwtape Letters, by C.S. Lewis, Pontius Pilate, by Paul L. Maier, Pilgrim’s Progress, by John Bunyan, Treasure Island, by Robert Louis Stevenson, Twelfth Night, by William Shakespeare, The Hawk and the Dove Trilogy, by Penelope Wilcock, From Jerusalem to Irian Jaya, by Ruth A. Tucker, What if Jesus Had Never Been Born, by D. James Kennedy and Jerry Newcombe and, The Jesus I Never Knew, by Philip Yancey. Out of these, my top two would be Pontius Pilate and What if Jesus Had Never Been Born.

Pontius Pilate, by Paul L. Maier, is a historical novel about Pontius Pilate—a person who is well known, but at the same time relatively unknown. You may know of Pontius Pilate for his part in the death of Jesus, but have no idea what the rest of his life was like. Although this book is a biography of sorts, it cannot be considered non-fiction. The author stayed as close to the truth as possible, but since not much was recorded of Pontius Pilate’s life, Mr. Maier had to improvise the details. Pontius Pilate also portrays what life was like for Jews living in Judea under the control of the Romans. It is written from a Roman perspective, which I found very intriguing. This book offers an interesting historical perspective on life in Judea during the first century.

What if Jesus Had Never Been Born, by D. James Kennedy and Jerry Newcombe, is a fascinating book. The purpose of the book is to prove this truth: “Had Jesus never been born, this world would be far more miserable than it is. In fact, many of man’s noblest and kindest deeds find their motivation in love for Jesus Christ; and some of our greatest accomplishments have their origin in service rendered to the humble carpenter of Nazareth. (What if Jesus Had Never Been Born, Introduction page).” This book helped me understand how morally corrupt society was before Jesus came, and how Christianity changed everything. The authors demonstrated how much more corrupt society would be today, without Christ’s advent. I found this book very intriguing, I highly recommend it. 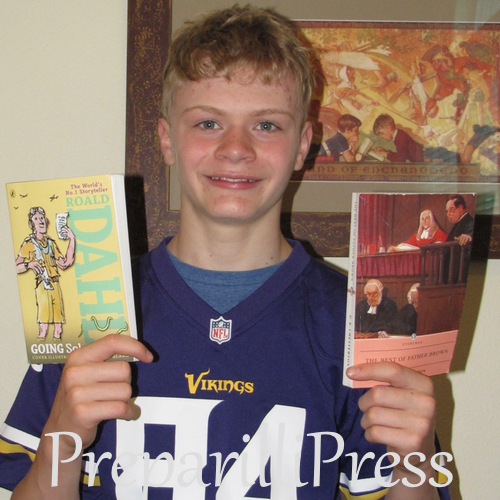 My two favorite books this year were The Best of Father Brown by G. K. Chesterton and Going Solo by Roald Dahl.

The Best of Father Brown is a compilation of Chesterton’s short stories featuring the character, Father Brown. Father Brown is a priest-detective who has an interesting way of solving mysteries. In most of the stories, I didn’t recognize the clues to solving the case, but Father Brown always figures it out. I prefer this kind of mystery/suspense style of book as compared to the gothic novels featured in this school year.

Going Solo was my other favorite book of Core 200. The author, Roald Dahl, is best known for his book, Charlie and the Chocolate Factory. Going Solo is his autobiography. Dahl was a Royal Air Force pilot, in the African theater, during World War II (my favorite time period to learn about). He survives some pretty amazing encounters with the enemy. This is an action-packed tale, and Dahl grabs the readers attention with his colorful writing style. This book isn’t just for us guys, my sister enjoyed it, too!

A note from Shelley–I really enjoyed this year of books, too. Like Gretchen, I’d have a hard time singling out just two that I thought were the best. I have to admit that I kind of enjoyed reading the classics–Pride and Prejudice, Jane Eyre, Treasure Island and Robinson Crusoe. A couple of these titles I remember being required to read in highschool (I don’t remember enjoying them, however :).

Out of all of the Core 230 books, I think I’d pick The Hawk and the Dove, by Penelope Wilcock. Frankly, I had never spent much time thinking about life as a monk–so the setting of this series was unique for me. I enjoyed the characters and their struggles to submit to the life they chose. It is really a wonderful book. I did delve into the series (there are a few other titles that follow The Hawk and the Dove) and didn’t find it quite as enchanting as this first set of books. Like most sequels, the best story was the first story.